Welcome to Day 1283 of our Wisdom-Trek, and thank you for joining me.

What Did the Shepherds Think? – Ask Gramps 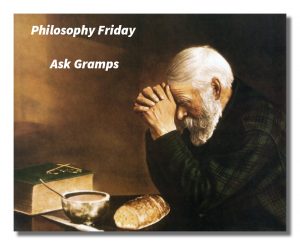 Hello, my friend, I am Guthrie Chamberlain, your captain on our journey to increase wisdom and create a living legacy. Thank you for joining us today as we explore wisdom on our 2nd millennium of podcasts. This is Day 1283 of our trek, and it is time for our Philosophy Friday series. Each Friday, we ponder some of the basic truths and mysteries of life, and how they can impact us in creating our living legacy.

As we continue on this trek called life, sometimes we have questions about life, so our Friday trek is a time when we can “Ask Gramps.” Gramps will answer questions that you would like to ask your dad or granddad, but for whatever reason, you are unable to. No matter how old we are, I know that all of us would like the opportunity to ask Dad or Gramps questions about life in many areas.

We may mix it up a bit on our Friday episodes, but we will strive to keep them down to earth and enjoyable. If you have any questions that you would like to ask Gramps, please email them to guthrie@wisdom-trek.com.

So the question for this week is…

“Hey Gramps, I have always been intrigued by the fact that the angels first announced the birth of Christ to the lowly shepherds in the field. Do you have insights you can share about the significance of this announcement?”

What Did the Shepherds Think? 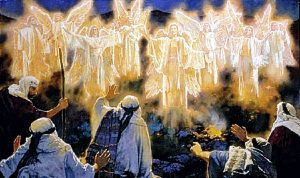 Let me first share this account from Luke 2:7-14, “She gave birth to her firstborn son. She wrapped him snugly in strips of cloth and laid him in a manger, because there was no lodging available for them. That night there were shepherds staying in the fields nearby, guarding their flocks of sheep. Suddenly, an angel of the Lord appeared among them, and the radiance of the Lord’s glory surrounded them. They were terrified,  but the angel reassured them. ‘Don’t be afraid!’ he said. ‘I bring you good news that will bring great joy to all people. The Savior—yes, the Messiah, the Lord—has been born today in Bethlehem, the city of David! And you will recognize him by this sign: You will find a baby wrapped snugly in strips of cloth, lying in a manger.’  Suddenly, the angel was joined by a vast host of others, the armies of heaven, praising God and saying,  ‘Glory to God in highest heaven, and peace on earth to those with whom God is pleased.’”

Their part in the life of Christ did not end on the night of His birth.

How did they feel when the angels told them of Christ’s birth?

Certainly, they were awestruck. They were most likely quite shocked to be chosen to receive this announcement. They were, after all, fairly low on the social scale even though they were the guardians of the main resource of the towns’ primary industry. They were perhaps not well known for their social skills. They were out in the hills by themselves for long periods of time, and human interaction seldom occurred. The appearance of angels announcing a birth would be shocking enough, but they must have wondered at the significance of their inclusion in it at all. They were, as a matter of course, avoided by the general population.

Perhaps it was later that they began to understand the significance of their role in Jesus’ life. Perhaps even years later when Jesus’ ministry was in full swing, and if they realized that this Jesus was the same babe they once honored when John the Baptist announced Him as the Lamb of God, maybe it was then that they began to see the implication of their presence in the stable. For the reality of their job, their vocation, one that was often passed on from father to son for generations, was to raise these lambs for sacrifice in the Temple at Jerusalem. This was the industry of this little town of Bethlehem. They were raised to be laid across the altar as atonement for the sins of the people. The perfect lamb was chosen and killed from the flocks they raised! Not since Abraham had stretched his own son, Isaac across the stones had a human ever laid upon the altar, and he had been spared. Simply taking the title of The Lamb told the world who He was, for those who had ears to hear. 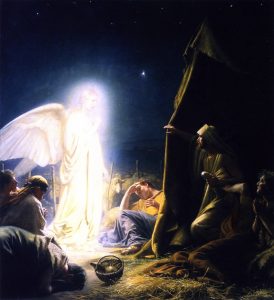 Did they perhaps hear of this and cover their mouths as they gasped in surprise? This babe, this Man, the Lamb?

How could this be?

And again, how did they feel when this same man who called himself the Son of God, also named Himself the Good Shepherd? Did they straighten their spines with the implication of the honor He gave them? Did they plant their shepherd’s staffs and let the light of pride shine in their eyes? Did they smile and think, “I knew Him! I was there when He was born!”?

Would they not also bow their heads in sorrow, and let a tear roll down a weathered cheek when they knew the final destination of the unblemished lamb?

And how is it that He was both lamb and shepherd?

As the Lamb, He knew He needed a caring and watchful eye on Him to ensure His safety and fulfill His needs.

As a Shepherd He knew exactly what a lamb needed when He took them to the still waters, He knew how best to protect them; by laying down His life for them on the altar where they were meant to lie. 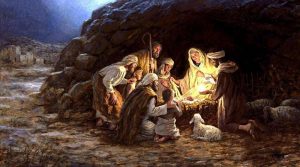 As a man, He knows our needs.

As our God, He knows our needs.

But all of this must have come later to the minds of the shepherds. They could not have known all that He was as they beheld Him in the manger. All they knew was the joy His birth brought the world that day, overwhelming as it was. They saw and heard a heavenly host, and found a King in lowly circumstance.

And in so many ways and so many times I am left to wonder what it must have been like to be a shepherd, kneeling before that bed of hay bringing with me the only gift I had available to me and saying,

“I am but a lowly shepherd and I have so little, but here, I have brought for you this perfect lamb…”

Copyright 2004 Dan Bode (Danbode76@gmail.com). Permission is granted to send this to others, but not for commercial purposes.

That is a wrap for today’s question. Join us again next Friday for another question on our Ask Gramps episode.  Our next trek is Mediation Monday, where we will help you reflect on what is most important in life. So encourage your friends and family to join us and then come along on Monday for another day of our Wisdom-Trek, Creating a Legacy.

If you would like to listen to any of the past 1282 daily treks or read the associated journals, they are all available at Wisdom-Trek.com. I encourage you to subscribe to Wisdom-Trek on your favorite podcast player, so each day will be downloaded to you automatically.

I am Guthrie Chamberlain reminding you to Keep Moving Forward, Enjoy Your Journey, and Create a Great Day Everyday! See you on Monday!