Welcome to Day 971 of our Wisdom-Trek, and thank you for joining me.

Thank you for joining us for our five days per week wisdom and legacy building podcast. We are broadcasting from our studio at The Big House in Marietta, Ohio. Today is Day 971 of our trek, and it is Wisdom Wednesday. Creating a Biblical worldview is important to have a proper perspective on today’s current events.

To establish a Biblical Worldview, you must also have a proper understanding of God’s Word. Especially in our western cultures, we do not fully understand the Scriptures from the mindset and culture of the authors. In order to help us all have a better understanding of some of the more obscure passages in God’s Word, we are investing Wisdom Wednesday reviewing a series of essays from one of today’s most prominent Hebrew Scholars Dr. Micheal S. Heiser. He has compiled these essays into a book titled I Dare You Not to Bore Me with the Bible.

While reading or listening to most news today, you would think that the world is going to hell in a handbasket. Too many of us forget that the Lord of Heaven’s Armies is prevailing, even today. Today’s essay will explore… 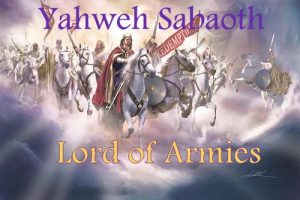 We’ll start our essay with familiar verses for both Protestants and Catholics, but we will dig much deeper into the cosmic meaning behind this verse. Matthew 16:17-18 says, “Jesus replied, ‘You are blessed, Simon son of John, because my Father in heaven has revealed this to you. You did not learn this from any human being. Now I say to you that you are Peter (which means ‘rock’), and upon this rock I will build my church, and all the powers of hell will not conquer it.’”

The “powers of hell”? Why did Jesus respond to Peter’s confession in Matthew 16:16, “Simon Peter answered, ‘You are the Messiah, the Son of the living God.’”

· The Powers of Hell in Cosmic Geography

When we read “hell,” we naturally think of the realm of the unbelieving dead. But the Greek word translated “hell” (hades) is also the name for the Underworld—Hades, the realm of all the dead, not just unbelievers. The Hebrew equivalent to Hades is Sheol—the place “under the earth” where all went after this life ended.

Sheol is a place of no return (Job 17:16) in which “ropes trap its inhabitants” (2 Samuel 22:5-6), preventing any escape (Job 7:9). Both the righteous and the unrighteous went to Sheol. The righteous believer, however, could hope for deliverance and eternity with God as Psalms 40:15 reads, “But as for me, God will redeem my life. He will snatch me from the power of the grave.”

While the imagery associated with the Underworld would have unnerved the disciples, Jesus’s reference to the gates (powers) of Hades would have jolted them for another reason. If they knew their Old Testament well, they understood that they were standing before those very gates or powers as Jesus spoke.

· The Gates (Powers) of Hell in Terrestrial Geography

Matthew 16 takes place in Caesarea Philippi, situated near a mountainous region containing Mount Hermon. In the Old Testament, this region was known as Bashan, a place with a sinister reputation. 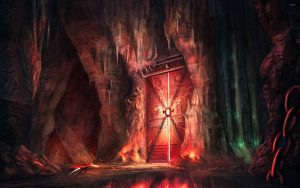 According to the Old Testament, Bashan was controlled by two kings; Sihon and Og, who were associated with the ancient giant clans: the Rephaim and the Anakim as described in Deuteronomy [2:10]-12 and Joshua 12:1-5. The two main cities of their kingdom were Ashtaroth and Edrei, home to the Rephaim (Deuteronomy 3:1, 10-11: Joshua 12:4-5).

These cities and their Rephaim inhabitants are mentioned by name in Canaanite (Ugaritic) cuneiform tablets. The people of Ugarit believed the Rephaim were the spirits of dead warrior-kings. They also believed that the cities of Ashtaroth and Edrei were the entryway to the Underworld or the Gates of Sheol. Also, during Israel’s divided kingdom period, Jereboam built a pagan religious center at Pan, just south of Mount Hermon—where the Israelites worshiped Baal instead of Yahweh.

For the disciples. Bashan was an evil, otherworldly domain. But they had two other reasons to feel queasy about where they were standing. According to Jewish tradition, Mount Hermon was the location where the divine sons of God had descended from heaven, ultimately corrupting humankind via their offspring with human women (Genesis 6:1-4). These offspring were known as Nephilim, ancestors of the Anakim and the Rephaim (Number [13:30]-33). In Jewish theology, the spirits of these giants were demons as described in the 2 Temple Jewish book (1 Enoch 15:1-12).

To make the region even spookier, Caesarea Philippi had been built and dedicated to Zeus. This pagan god was worshiped at a religious center built a short distance from the more ancient one in Dan, at the foot of Mount Hermon. Aside from the brief interlude during the time of Joshua through Solomon, the gates of hell were continually open for business.

The rock which Jesus referred to in this passage was neither Peter nor Himself; it was the physical rock on which they were standing, the foot of Mount Hermon, the demonic headquarters of the Old Testament and the Greek world.

We often presume that the phrase “all the powers of hell will not conquer it” describes a Church taking on the onslaught of evil. It is describing the Church that sees Jesus as the conqueror. Jesus was declaring war on evil and death. Jesus would build His Church atop the gates (powers) of hell. He is in the process through the building of His Kingdom on earth of completely annihilating the powers of hell.

That will conclude our essay for this week. Next Wisdom Wednesday we will continue in the New Testament as we look at Dr. Heiser’s next essay titled “My Guardian Angel.”  I believe you will find this another interesting topic to consider as we build our Biblical worldview. 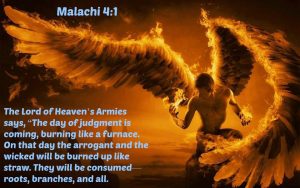 If you would like to listen to any of our past 970 treks or read the Wisdom Journal, they are available at Wisdom-Trek.com. I encourage you to subscribe to Apple Podcast or Google Podcast so that each day’s trek will be downloaded automatically.