Welcome to Day 1121 of our Wisdom-Trek, and thank you for joining me.

Hello, my friend, I am Guthrie Chamberlain, your captain on our journey to increase wisdom and create a living legacy. Thank you for joining us today as we explore wisdom on our 2nd millennium of podcasts. This is Day 1121 of our trek, and it is Worldview Wednesday. Creating a Biblical worldview is important to have a proper perspective on today’s current events. To establish a Biblical worldview, you must also have a proper understanding of God and His Word.

On our Worldview Wednesday episodes we are in a series in which we are covering another detailed review of a book from one of today’s most prominent Hebrew Scholars Dr. Micheal S. Heiser. We are taking a deep dive and will share Dr. Heiser’s insights into the question which is also the title of his book “What Does God Want?” 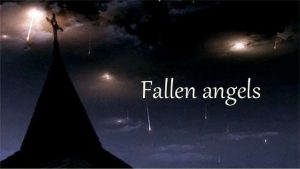 Last week we learned in Dr. Heiser’s book that God’s human family chose to disobey His commands in the Garden of Eden, yet this choice was a result of the influence of one of God’s supernatural children. This week we move to another time where God’s supernatural family desired to create humans in their image. This is a direct affront to God and His plans for His human family.

You may have heard somewhere along the way that the Bible teaches the world has so much evil in it because of humanity’s fall into sin in the Garden of Eden. That’s only partially true. After the tragedy of Eden, there were two more episodes that plunged humanity further into the depths of depravity and chaos.

The second of these is described in Genesis 6:1-4, arguably one of the stranger incidents in the entire Bible. Dr. Heiser wrote extensively on this topic in an excellent book called The Unseen Realm and a less intense version called Supernatural. Let me read Genesis 6:1-4, “Then the people began to multiply on the earth, and daughters were born to them.  The sons of God saw the beautiful women and took any they wanted as their wives. Then the Lord said, ‘My Spirit will not put up with humans for such a long time, for they are only mortal flesh. In the future, their normal lifespan will be no more than 120 years.’  In those days, and for some time after, giant Nephilites lived on the earth, for whenever the sons of God had intercourse with women, they gave birth to children who became the heroes and famous warriors of ancient times.” 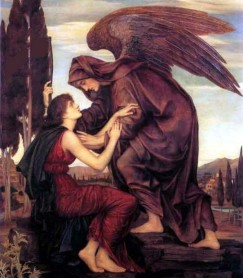 The story is about how some of God’s supernatural children (the “sons of God”) wanted to imitate God by producing their own human children to image themselves. They decided to use human women (the “beautiful women”) for that purpose. This made them rivals to God, their own heavenly father. Rather than be happy with God’s desire to have humans become members of their family, they decided they wanted to be overlords of their own humans. That wasn’t what God had in mind. God wanted a family, not slaves.

As we dig into this story deeper, we also find two other passages in the New Testament which refer to this second rebellion. 2 Peter 2:4-5 reads, “For God did not spare even the angels who sinned. He threw them into hell, in gloomy pits of darkness where they are being held until the day of judgment. And God did not spare the ancient world—except for Noah and the seven others in his family. Noah warned the world of God’s righteous judgment. So God protected Noah when he destroyed the world of ungodly people with a vast flood.”

These “angels that sinned” (2 Pet 2:4) transgressed the boundary between heaven and earth. Jude 6 tells us, “And I remind you of the angels who did not stay within the limits of authority God gave them but left the place where they belonged. God has kept them securely chained in prisons of darkness, waiting for the great day of judgment.”  The sons of God who we refer to as angels, “did not stay within their limits of authority.” God sent them to hell as a result.

The transgression was done, and it had disastrous consequences. Look at the two verses that follow the Bible’s recounting of this rebellion in Genesis 6:5-6, “The Lord observed the extent of human wickedness on the earth, and he saw that everything they thought or imagined was consistently and totally evil. So the Lord was sorry he had ever made them and put them on the earth. It broke his heart.” 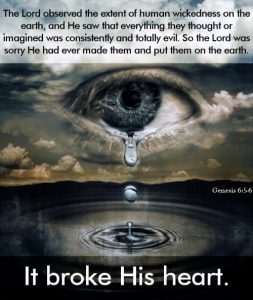 Think about that…“everything they thought or imagined was consistently and totally evil.” And “God was sorry” he had made humanity; the thought “broke His heart.”

This is the very definition of depravity and the sorrow it brings. The first supernatural rebellion led to humanity losing everlasting life with God (which is bad enough). This rebellion took the effects of sin to another level, accelerating human self-destruction. God felt deep remorse over the way things had turned out. Humanity had been permanently damaged.

The Bible tells us that God could see no other solution but to send the flood to wipe out humanity (Genesis [6:17]). It’s important to notice that the flood story never says God was angry. It only says he was heart-stricken over what was going on. God had decided to give humans freedom. He couldn’t take it away since doing so would mean they would no longer be like him; they’d no longer be truly human. The only choice was to start over and put an end to what the rebellious sons of God had caused.

Only one man was said to be righteous in God’s eyes—Noah (Genesis 6:9). At least there was one. God would take it. He would move ahead with his plan to have a human family.

God told Noah to build an ark (a large ship) so that he, his family, and multitudes of animals would survive. God still held out hope that, as deep as human depravity had become, his human children could be with him. Mercifully, he gave Noah 120 years to prepare for the flood (Genesis 6:3) and tell people what was going to happen so they could turn from their depravity and be forgiven (2 Peter 2:5).

In the end, people wouldn’t listen. They refused God’s gracious warning. Once again, God’s children turned their backs to him, as they were free to do. Is it any wonder God’s heart was so broken? At least there was Noah and his family. After the flood, God repeated the original commands he had given to Adam and Eve in Genesis 9:1, “Then God blessed Noah and his sons and told them in, ‘Be fruitful and multiply. Fill the earth.’”

God was starting over with them. He made a covenant with Noah that extended to all humankind (Genesis 9:8-17). A covenant is a promise or pledge. This covenant was one-sided; it was all about God’s promise to never destroy humanity (Genesis [9:11]). Amazingly, God still wanted a human family.

Not as amazing—but still pretty incredible—the abuse of God’s goodness would continue. A third rebellion followed the flood. This one would frame the rest of the biblical story, and show, again, God’s unconquerable patience and love.

That will conclude our lesson for this week from Dr. Heiser’s book What Does God Want? Next Worldview Wednesday we will discover that even after God wiped out most of humanity in the great flood, that the rebellion continued. I believe you will find each Worldview Wednesday an interesting topic to consider as we build our Biblical worldview. 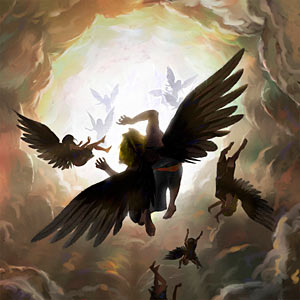 If you would like to listen to any of our past 1120 treks or read the Wisdom Journal, they are available at Wisdom-Trek.com. I encourage you to subscribe to Wisdom-Trek on your favorite podcast player so that each day’s trek will be downloaded automatically.