Welcome to Day 763 of our Wisdom-Trek, and thank you for joining me. 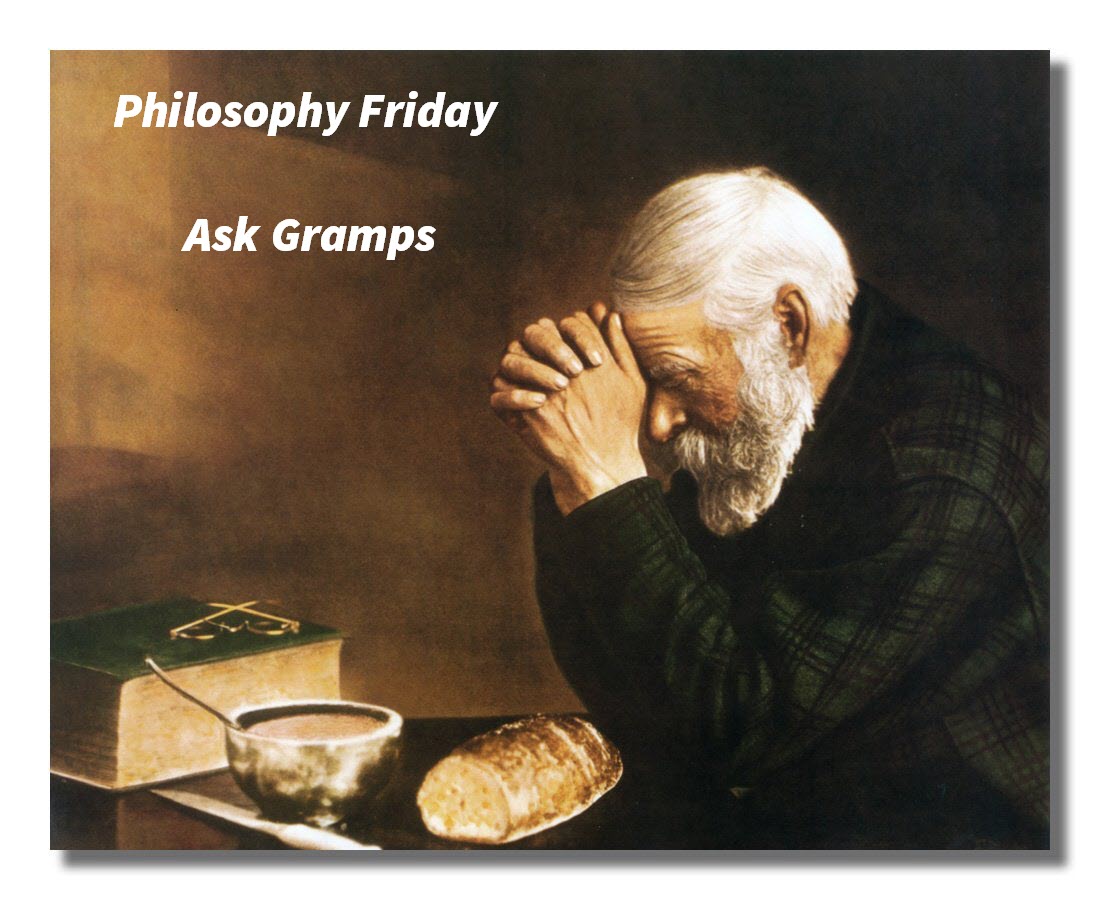 Thank you for joining us for our 5 days per week wisdom and legacy building podcast. This is Day 763 of our trek, and it is time for our Philosophy Friday series. Each Friday we will ponder some of the basic truths and mysteries of life, and how they can impact us in creating our living legacy.

Beginning with today’s podcast and for the next three to four weeks we are going to interrupt our regular podcast schedule. Due to travel and other events this next month, starting next week, the Wisdom-Trek segments may be shorter so that I can pre-schedule them for the next few weeks. Today and all next week Gramps will be telling the Christmas story in chronological order.

We are broadcasting from our studio at The Big House in Marietta, Ohio. Christmas is just a few days away, but often during this busy time of year, we don’t invest the time to reflect on the true Christmas story as it was revealed in the New Testament. So let’s take the time these next six days to quietly reflect on all that took place during the very first Christmas.

“Hey Gramps, would you please tell us the Christmas story chronologically as it is revealed in the Bible?”

‘Twas the Year Before Christmas

To get the entire Christmas story in chronological order, you must go to several passages in the books of Matthew and Luke. We will start with Luke 1:5-56.

· The Birth of John the Baptist Foretold 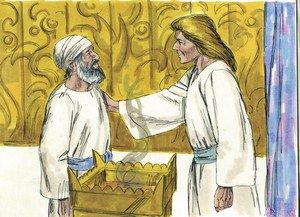 When Herod was king of Judea, there was a Jewish priest named Zechariah. He was a member of the priestly order of Abijah, and his wife, Elizabeth, was also from the priestly line of Aaron.  Zechariah and Elizabeth were righteous in God’s eyes, careful to obey all of the Lord’s commandments and regulations.  They had no children because Elizabeth was unable to conceive, and they were both very old.

One day Zechariah was serving God in the Temple, for his order was on duty that week.  As was the custom of the priests, he was chosen by lot to enter the sanctuary of the Lord and burn incense.  While the incense was being burned, a great crowd stood outside, praying.

While Zechariah was in the sanctuary, an angel of the Lord appeared to him, standing to the right of the incense altar.  Zechariah was shaken and overwhelmed with fear when he saw him.  But the angel said, “Don’t be afraid, Zechariah! God has heard your prayer. Your wife, Elizabeth, will give you a son, and you are to name him John.  You will have great joy and gladness, and many will rejoice at his birth, for he will be great in the eyes of the Lord. He must never touch wine or other alcoholic drinks. He will be filled with the Holy Spirit, even before his birth.  And he will turn many Israelites to the Lord their God.  He will be a man with the spirit and power of Elijah. He will prepare the people for the coming of the Lord. He will turn the hearts of the fathers to their children, and he will cause those who are rebellious to accept the wisdom of the godly.”

Zechariah said to the angel, “How can I be sure this will happen? I’m an old man now, and my wife is also well along in years.”

Then the angel said, “I am Gabriel! I stand in the very presence of God. It was he who sent me to bring you this good news! But now, since you didn’t believe what I said, you will be silent and unable to speak until the child is born. For my words will certainly be fulfilled at the proper time.”

Meanwhile, the people were waiting for Zechariah to come out of the sanctuary, wondering why he was taking so long. When he finally did come out, he couldn’t speak to them. Then they realized from his gestures and his silence that he must have seen a vision in the sanctuary.

When Zechariah’s week of service in the Temple was over, he returned home. Soon afterward his wife, Elizabeth, became pregnant and went into seclusion for five months. “How kind the Lord is!” she exclaimed. “He has taken away my disgrace of having no children.”

· The Birth of Jesus Foretold 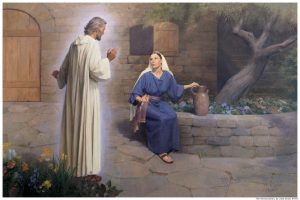 In the sixth month of Elizabeth’s pregnancy, God sent the angel Gabriel to Nazareth, a village in Galilee, to a virgin named Mary. She was engaged to be married to a man named Joseph, a descendant of King David.  Gabriel appeared to her and said, “Greetings, favored woman! The Lord is with you!”

Confused and disturbed, Mary tried to think what the angel could mean. “Don’t be afraid, Mary,” the angel told her, “for you have found favor with God! You will conceive and give birth to a son, and you will name him Jesus. He will be very great and will be called the Son of the Most High. The Lord God will give him the throne of his ancestor David. And he will reign over Israel forever; his Kingdom will never end!”

Mary asked the angel, “But how can this happen? I am a virgin.”

The angel replied, “The Holy Spirit will come upon you, and the power of the Most High will overshadow you. So the baby to be born will be holy, and he will be called the Son of God. What’s more, your relative Elizabeth has become pregnant in her old age! People used to say she was barren, but she has conceived a son and is now in her sixth month. For the word of God will never fail.”

Mary responded, “I am the Lord’s servant. May everything you have said about me come true.” And then the angel left her. 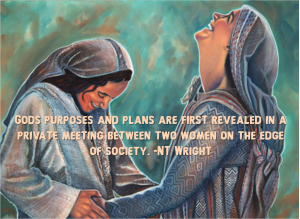 A few days later Mary hurried to the hill country of Judea, to the town where Zechariah lived. She entered the house and greeted Elizabeth. At the sound of Mary’s greeting, Elizabeth’s child leaped within her, and Elizabeth was filled with the Holy Spirit.

Elizabeth gave a glad cry and exclaimed to Mary, “God has blessed you above all women, and your child is blessed. Why am I so honored, that the mother of my Lord should visit me? When I heard your greeting, the baby in my womb jumped for joy.  You are blessed because you believed that the Lord would do what he said.”

· The Magnificat: Mary’s Song of Praise 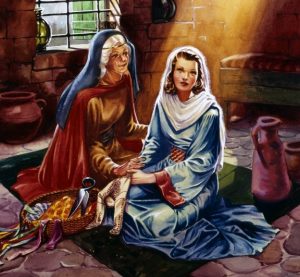 “Oh, how my soul praises the Lord.
How my spirit rejoices in God my Savior!
For he took notice of his lowly servant girl,
and from now on all generations will call me blessed.
For the Mighty One is holy,
and he has done great things for me.
He shows mercy from generation to generation
to all who fear him.
His mighty arm has done tremendous things!
He has scattered the proud and haughty ones.
He has brought down princes from their thrones
and exalted the humble.
He has filled the hungry with good things
and sent the rich away with empty hands.
He has helped his servant Israel
and remembered to be merciful.
For he made this promise to our ancestors,
to Abraham and his children forever.”

Mary stayed with Elizabeth about three months and then went back to her own home.

Now Gramps will switch to Joseph’s year before Christmas, which is found in Matthew [1:18]-25.

· The Birth of Jesus Foretold to Joseph 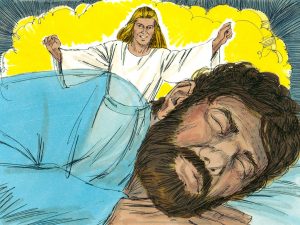 This is how Jesus the Messiah was born. His mother, Mary, was engaged to be married to Joseph. But before the marriage took place, while she was still a virgin, she became pregnant through the power of the Holy Spirit. Joseph, to whom she was engaged, was a righteous man and did not want to disgrace her publicly, so he decided to break the engagement quietly.

As he considered this, an angel of the Lord appeared to him in a dream. “Joseph, son of David,” the angel said, “do not be afraid to take Mary as your wife. For the child within her was conceived by the Holy Spirit. And she will have a son, and you are to name him Jesus, for he will save his people from their sins.”

All of this occurred to fulfill the Lord’s message through his prophet:

“Look! The virgin will conceive a child!
She will give birth to a son,
and they will call him Immanuel,
which means ‘God is with us.’”

When Joseph woke up, he did as the angel of the Lord commanded and took Mary as his wife.  But he did not have sexual relations with her until her son was born. And Joseph named him Jesus.

Monday through Friday of next week Gramps will continue with a short segment of the Christmas story as we finish out the Christmas week and the year. So encourage your friends and family to join us and then come along on Monday for another day of our Wisdom-Trek, Creating a Legacy.

If you would like to listen to any of our past 762 daily treks or read the Wisdom Journal, they are available at Wisdom-Trek.com. You can also subscribe to iTunes or Google Play, so that each day’s trek will be downloaded automatically.

This is Guthrie Chamberlain reminding you to Keep Moving Forward, Enjoy Your Journey, and Create a Great Day Every Day! See you on Monday!